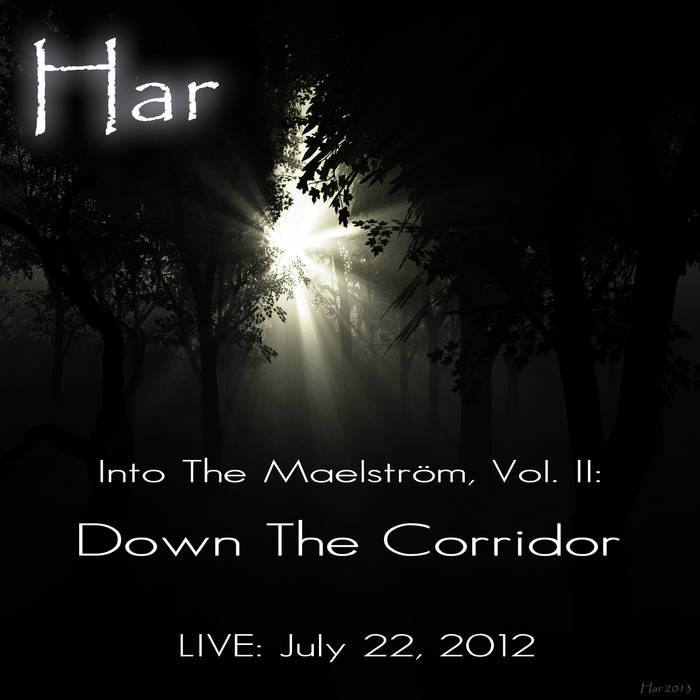 "Into The Maelström, Vol. 2: Down The Corridor. LIVE: July 22, 2012" is the fourth solo release from Pennsylvania-based ambient guitarist/bassist/Chapman Stickist Har.

"Vol. 2: Down The Corridor" was recorded and broadcast live to listeners world-wide on Sunday, July 22nd, 2012 in Har's studio "Ice Station Zebra" as part of "Triple Live (Ambient) Gonzo", a "broadcast live test run" for an in-venue solo performance night that occurred a week later.

It was performed entirely on his 8-string electric guitar, an extended-range instrument with two additional bass-range strings along with the other typical six guitar strings. No synths were used.
The resulting sounds are highly processed and looped in real-time using an arsenal of hardware effects and pedals.

Different drums/percussion phrases were programmed and recorded ahead of time, then triggered on-the-fly using a looper pedal during the course of the set. The actual full set was bit longer, but due to recording issues earlier in the track, "Vol. 2: Down The Corridor" has been edited down to a shorter length.

Har's music has been played on such well-known ambient/space-music radio shows as NPR's legendary Hearts of Space and Stars End, as well as online stations such as Stillstream.Com.

Performed, recorded, and broadcast live in the studio "Ice Station Zebra" with no overdubs, to listeners world-wide on the weekly online radio show “Nightscaping” on Stillstream.Com, July 22nd, 2012.