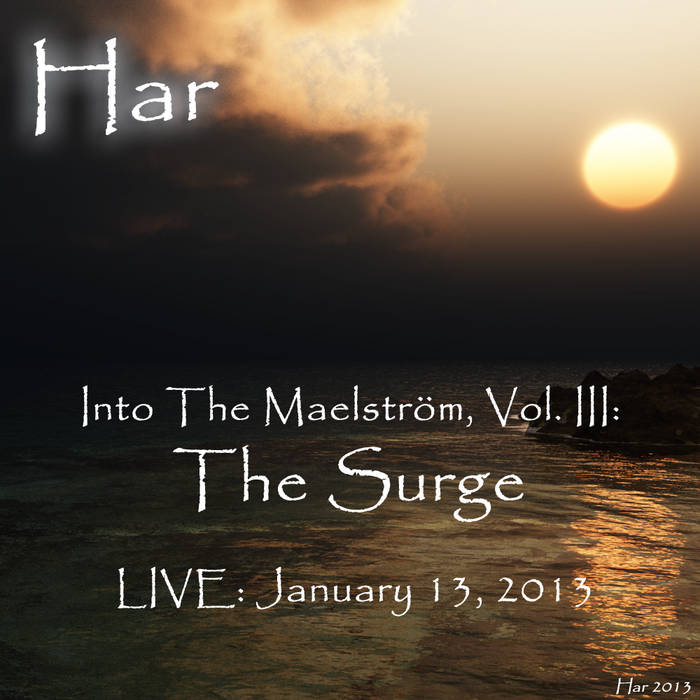 "Into The Maelström, Vol. 3: The Surge. LIVE: January 13, 2013" is the sixth solo release from Pennsylvania-based ambient guitarist/bassist/Chapman Stickist Har.

"Vol. 3: The Surge" was recorded and broadcast live to listeners world-wide on Sunday, January 13, 2013 in Har's studio "Ice Station Zebra".

It was performed entirely on his 8-string electric guitar, an extended-range instrument with two additional bass-range strings along with the other typical six guitar strings. No synths were used.
The resulting sounds are highly processed and looped in real-time using an arsenal of hardware effects and pedals. As with all such live improvised performances, it is fraught with hazard and contains the occasional kind of "warts and all" artifacts that is sometimes the nature of the beast. :)

The result is a fifty minute journey on sweeping waves, through a wide sonic landscape that alternates between warm pastoral regions and dark, eerie, foreboding territories - and gradually builds to a majestic ending.

Har's music has been played on such well-known ambient/space-music radio shows as NPR's legendary Hearts of Space and Stars End, as well as online stations such as SomaFM, and Stillstream.Com for which he is also the host of the weekly online dark-ambient radio show "Nightscaping".

Performed, recorded, and broadcast live in the studio "Ice Station Zebra" with no overdubs, to listeners world-wide on the weekly online radio show “Nightscaping” on Stillstream.Com, January 13, 2013.