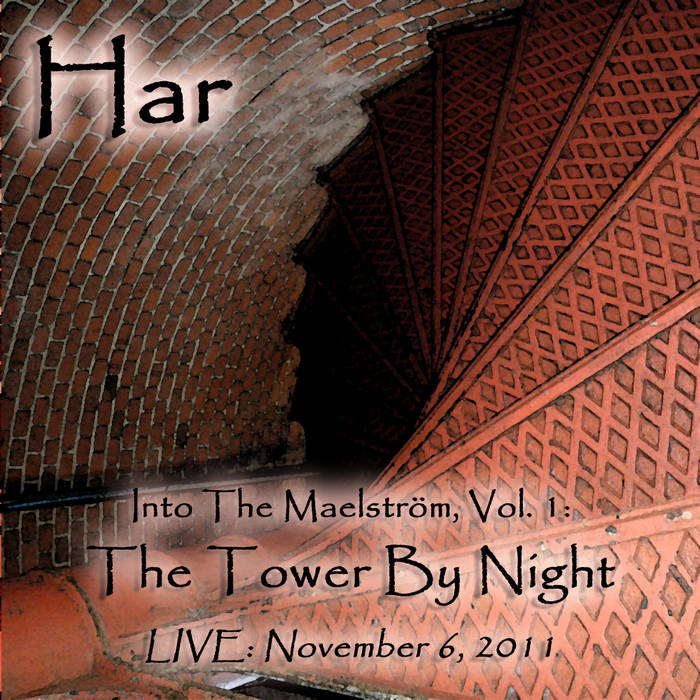 "Into The Maelström, Vol. 1: The Tower By Night. LIVE: November 6, 2011" is the third solo release from Chester County, Pennsylvania-based ambient guitarist/bassist/Chapman Stickist Har.

"Vol. 1: The Tower By Night" was recorded and broadcast live to listeners world-wide on Sunday, November 6th, 2011 in Har's studio "Ice Station Zebra" during the special "Week After Halloween" edition of "Nightscaping Radio".

It was performed entirely on his 8-string electric guitar, an extended-range instrument with two additional bass-range strings along with the other typical six guitar strings. No synths were used.
A variety of playing techniques were used including two-handed tapping as well as treating the guitar as a kind of percussion instrument - striking the body, neck and strings with fists and open hands. The resulting sounds are highly processed and looped in real-time using an arsenal of hardware effects and pedals.

Processed field recordings captured whilst climbing inside the Assateague Lighthouse at the Chincoteague National Wildlife Refuge on Assateague Island, Virginia were also triggered at various key points to add chilling ambient sound fields during the performance—sometimes providing a feeling of massive, ancient unearthly mechanics within a cavernous vertical landscape.

The combined results are a sixty-six minute sonic journey through a dark, mysterious and foreboding Autumnal landscape that can be alternately darkly soothing and terrifyingly haunted.

It's not lighthearted "chill-out ambient" to gently fall asleep to—but then depending on your current state of mind...perhaps it is. Keep an eye over your shoulder though, regardless...

Har's music has been played on such well-known ambient/space-music radio shows as NPR's legendary Hearts of Space and Stars End, as well as online stations such as SomaFM, Progzilla Radio, Radio Spiral, and Stillstream for which he was also the former host of the weekly online dark-ambient radio show "Nightscaping radio".
A segment of "The Tower By Night" was also featured on the Hearts of Space PGM 993: "CATHARSIS" - "an ambient noir journey for Halloween".

"This is a release that you just give yourself over to. You’re in good hands, and Har delivers you back from your own inner-world excursion in one piece."
--John Shanahan, Hypnagogue Music Reviews
hypnagogue.net/2012/03/18/har-into-the-maelstrom-vol-1-the-tower-by-night/

Performed, recorded, and broadcast live in the studio with no overdubs on the weekly online radio show “Nightscaping” on Stillstream.Com, November 6th, 2011.